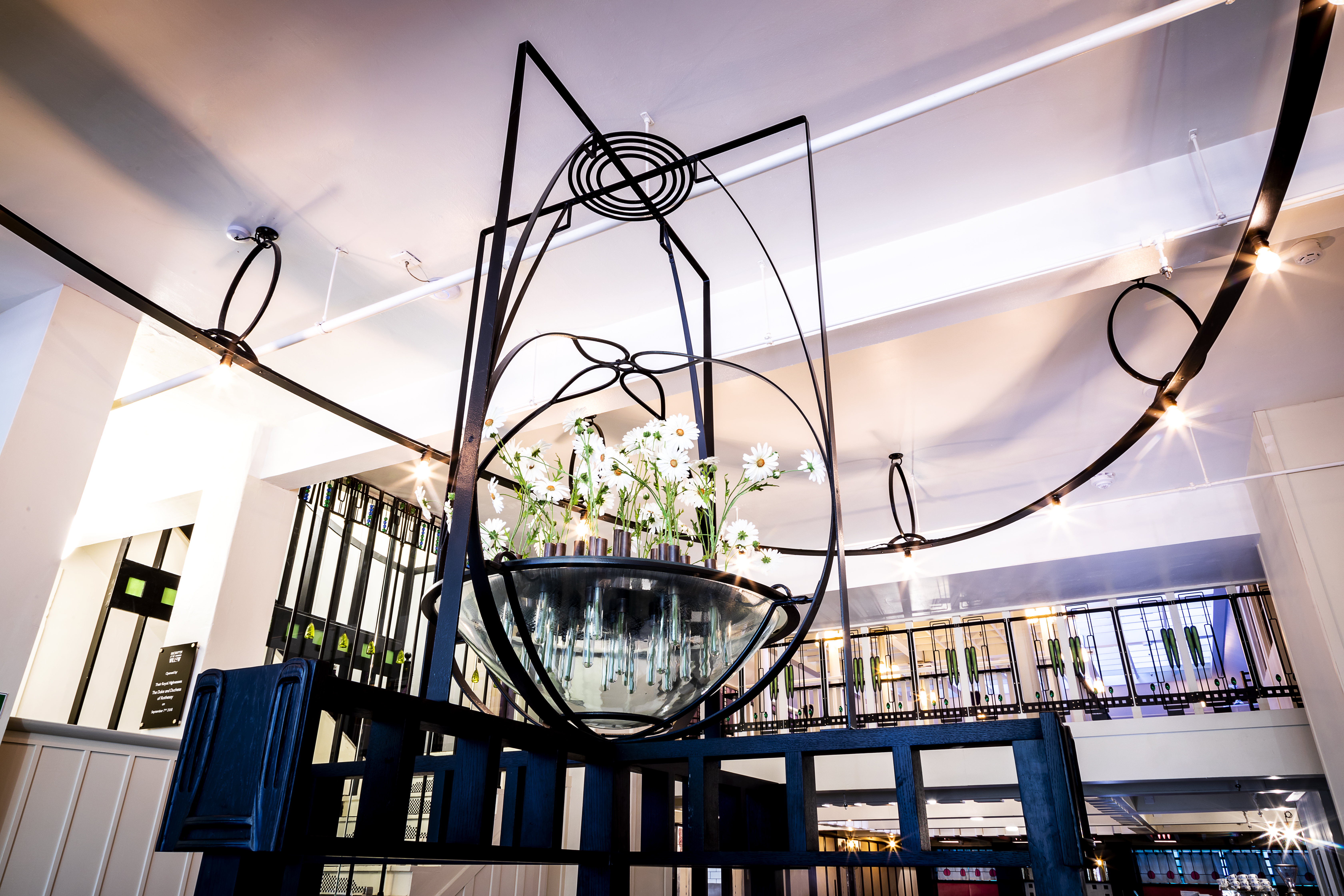 Mackintosh at the Willow, A Wee History – Part 7.

This week’s subject is the Front Saloon. This area is the very first that you will experience when entering the original Willow Tea Rooms building at 217 Sauchiehall street.

The effect of entering Mackintosh at the Willow is keenly important to the overall visual and physiological impact on the visitor. In approaching the double doors of the main entrance, guests will be very aware of the distinct exterior of the building in comparison to its neighbours. The frontage is covered entirely in a white render that creates a stark contrast with the flanking dark-grey buildings, making it stand out against the darker surroundings with striking effect. This bright façade is entered through dark double doors that, again, highlight the whiteness of the exterior and then the airy interiors of the rooms ahead.

Walking through the vestibule into the main tea rooms, guests will notice the willow frieze on their left hand-side and glass panels with an abstract willow design on their right. The glass panels are set into the partitioning that creates a small hallway between the front door and the opening to the Front Saloon. This not only shelters the seating area from the elements but creates a screen effect that mimics a tree line, with the glass allowing the light to permeate through the branches and illuminate the space. We are introduced to a specific colour scheme of pinks and lime greens, recalling the first flush of spring and a fresh feeling of rebirth. Upon reaching the entrance to the Front Saloon the dominating presence of the Baldacchino (pronounced baal-da-keen-no) is the first feature of the space that will attract your attention. Baldacchino is the Italian term for baldachin, or baldaquin which is a canopy that is usually placed over an alter or a throne.

By employing an interior element that is usually associated with a focus of worship, Mackintosh is making a tongue in cheek nod to the loyal and enthusiastic following Miss Cranston and her famous tea rooms had achieved.

This stunning design feature was recreated in Mackintosh at the Willow’s extensive restoration by the incredibly talented Master Blacksmith and Fellow of the Worshipful Company of Blacksmiths, Alan Dawson. As the original Baldacchino no longer existed, Dawson was tasked with an extensive research project of the structure which was eventually crafted by using old photographs as his only points of reference.

A baldaquin acts as a visual mediation between the excessive size of a building structure and the diminutive scale of its human occupants, aiming to make them feel more comfortable in their surroundings. The Baldacchino at Mackintosh at the Willow is a structure of wood and metal, stretching up like a tree through the centre of the room. It holds four seats at its base and a large ovular light fitting encircles the central column to give the feeling of a canopy or treetop.

It is interesting to note here that wooded areas have historically held great importance in religious practices. Traditionally across many religions we have examples of something broadly dubbed the Sacred Grove, which featured heavily in the mythological and religious cult practices of the Celtic people. In Greek and roman architecture, they based their construction of religious spaces on the concept of a wooden area, with multiple columns spanning up to merge in to one larger canopy. Mackintosh at the Willow encompasses some of these ancient ideals, recreating the sacred grove for the cult of Cranston.

Born and bred in Glasgow, Mackintosh also added the savvy element of an umbrella stand to this very grand sculpture for the comfort of Miss Cranston’s guests. Factors such as this demonstrate the care Mackintosh took in designing for Miss Cranston, as he assessed small but defining elements that show a subtle but empathetic design style that did not just value aesthetics. This space was meant to be used and used without too much pomp and ceremony. The very top and centre of the Baldacchino holds a glass semi-sphere within which Miss Cranston would place fresh flowers picked from her own garden to adorn it.

The frieze from the left-hand size of the entranceway is mirrored on the furthest wall of the Front Saloon, creating an abstracted forest surrounding its inhabitants.

As mentioned in our previous blogs, the Front Saloon is visually representative of a meadow that spans backwards towards a denser undergrowth of a forest that is created with the darker design features of the Back Saloon. The open airy feel of the room emphasises this, using the height and the glass frontage to psychologically create as much space as possible. Linen hangings act as blinds on the lower half of the windows, painted with natural and vegetal imagery. Their opaque qualities allow for privacy from the outside world will continuing to let in as much light as possible, keeping the fantasy of the room alive by shielding it from the mundanity of daily life beyond. The fireplace, located on the left-hand side when looking out towards Sauchiehall Street, continues this line of natural imagery with flower shaped plaster work mouldings reminiscent of orchids.