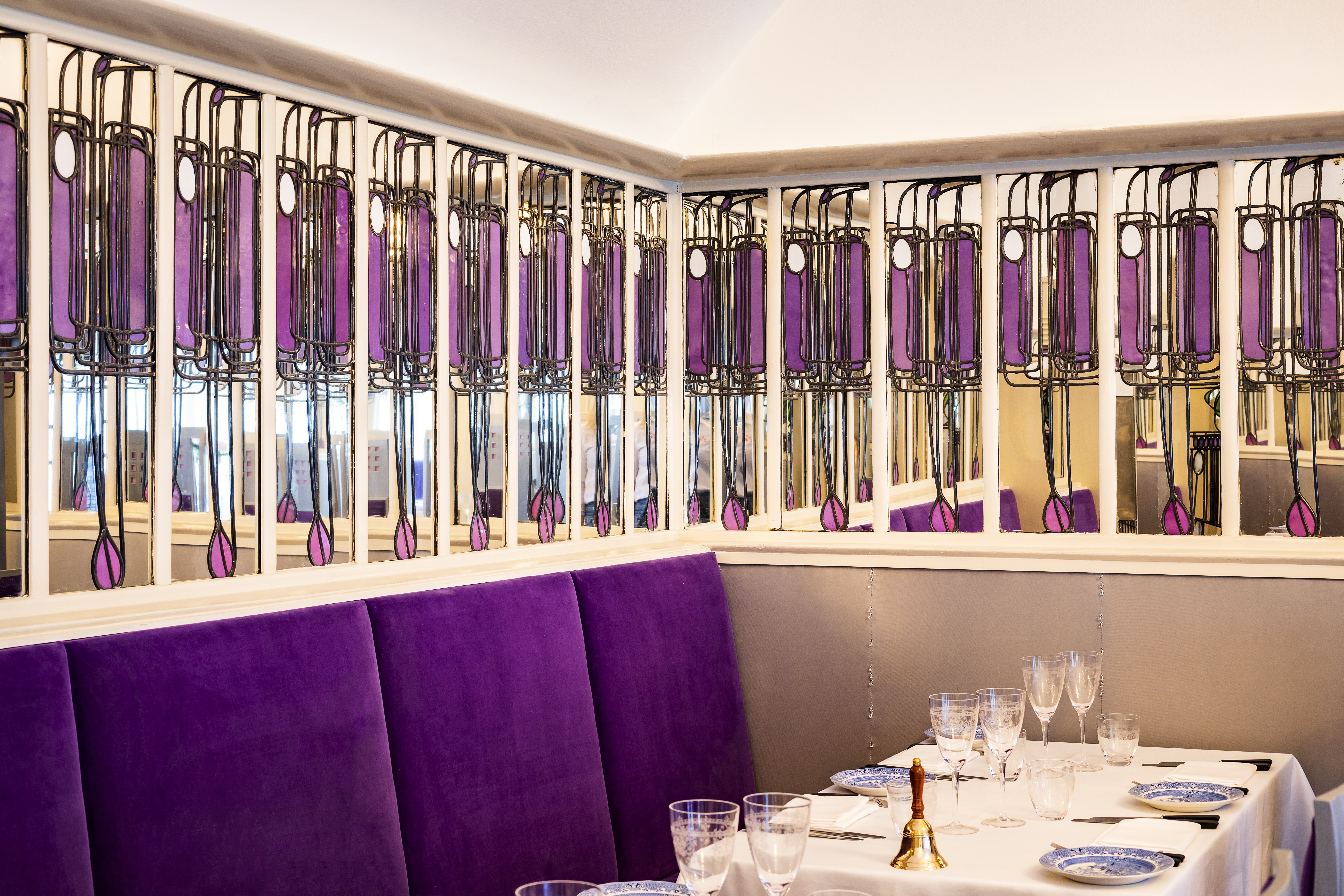 Mackintosh at the Willow, A Wee History – Part 9

This week’s blog will focus on the most famous room in Mackintosh at the Willow – the Salon de Luxe.

Many of you will know that the Salon de Luxe is located on the first floor of the tea rooms, above the Front Saloon and below the Billiard Room. The significance of this room has been emphasised by adding the bow window and distinctive, eye catching glass panels. The bow window also serves to push the first-floor façade forward, projecting it beyond the exterior wall to create additional space within the room and providing extra light. Light is a key element in all of Mackintosh’s designs, but the Salon de Luxe exemplifies this magnificently.

It is important, firstly, to recognise that this room is most likely to have been be designed in its majority by Margaret Macdonald Mackintosh, who was also married to Charles Rennie Mackintosh. We do not know for certain how much input she had, except for the gesso panel which we know was entirely hers. Macdonald used a unique method to create her panels and the process would have been very organic as the materials were rather difficult to control. The original gesso panel, aptly named O Ye, All Ye Who Walk in Willowwood, was commissioned by Miss Catherine Cranston in 1903 and now stays in the Kelvingrove Art Gallery and Museum in Glasgow’s West End. The gesso on display at Mackintosh at the Willow is an immaculate replica, created especially for us by the incredibly talented Dai and Jenny Vaughn of Vaughn Arts. The title of the gesso was taken from the first line of the first of Dante Gabriel Rossetti’s four ‘Willowwood’ sonnets and is illustrative narrative of the poem itself. The poem contains three main characters: the poet, lost love and love itself personified. More on the gesso panel of the Salon can be discovered in our previous blogs ‘Mackintosh at the Willow, A Wee History – Part 3’.

This magical room has been called many names in its time, but one of its more popular nicknames is simply The Room de Luxe, which observes the incredibly opulent nature of the space. The materials employed in the creation of the Salon do not shy away from total luxury, with the use of velvet, glass, silver paint and silk. The waitresses were given special uniforms which were crafted in Paris and beautiful pearl necklaces.

Guests enter the room through heavy leaded glass doors, decorated with the abstracted shape of a kimono, in keeping with the Mackintosh’s pre-occupation with Japanese inspired features. The room is quite regular in its rectangular form, relaxing slightly at the bowed window that overlooks Sauchiehall Street. The top half of the walls are lined with simmering glass panels decorated with a repetitive organic pattern, while the lower half of the wall is lined with silk that has been delicately stitched with glass beads. These beads are perhaps representative of dew drops or droplets of well water. The willow tree has always been symbolically linked to water and the feminine and The Salon de Luxe, much like Dante Rosetti’s sonnet, intrinsically links both together.

Dominating the upper levels of the room are two glittering chandeliers made from a complicated arrangement of green and pink glass spheres and droplets. The glass has purposefully been infused with seeds or air bubbles, which is rather unusual as glass artists spend their careers making sure there are no bubbles at all in their work.  The combination of the bubbles and their infusion into the glass is reminiscent of air bubbles rising in water which connects the narrative of loves kiss brimming at the surface of the water.

And as I stooped, her own lips rising there

Bubbled with brimming kisses at my mouth

These clever little bubbles also refract the light across the barrel-vaulted ceiling, creating a cosy glow that brushes off the cobwebs of a grey Scottish day. Today the chandeliers are very precise replicas of the originals, created for Mackintosh at the Willow by Ingrid Philips through reference of old photographs.

The silver patina on the chairs was achieved with 5 layers of silver flake and, in replicating the chairs, the velvet of the seats was matched to a fragment of the same shade found in Margaret Macdonald Mackintosh’s sewing basket. This adds to the sparkling and reflective aesthetic of the room giving the space a jewellery box effect.

The Salon de Luxe is also known as the lady’s room. This is because it was first and foremost designed as an area for women to meet outside of the family home without being chaperoned. Even by 1911, Suffrage Organiser Kate Frye was still writing in her diary about the reception she would receive in tearooms and restaurants despite these significant developments. On 22 March 1911, from Nottingham, she wrote ‘Came in, had my lunch [in the hotel dining room] in company with four motorists. It is funny the way men come in here and, seeing me, shoot out again and I hear whispered conversations outside on the landing with the waitress. Then they come in very subdued and make conversation one to another and try not to look at me. Awfully funny – they might never have seen a woman before – but I suppose it does seem a strange place to find one.’

This air of independence in turn of the century Glasgow was reflected through the suffragette movements gatherings that would often take place in these newly forming tearooms. They were the perfect location for meetings as many of these tea houses were owned and operated by women who would often be sympathetic to their ideals in a way that men were often not. The tearoom itself was a symbol if independence, what with women being the owners of businesses in a way that had not been seen before. This could make then financially, socially, and economically independent, removing the need for a male supervisor and finally giving women autonomy. As these new spaces were some of the very first to admit women as patrons, they also provided a perfect meeting place for those discussing the cause without creating too much of a stir.

Today the timeless Salon de Luxe is open to the public for afternoon tea only, at either 12noon or 3pm and private events! With seating for up to 40 guests and a variety of menus, the Salon is the perfect venue for an intimate celebration or business lunches. If you are interested in planning your next event in the Salon de Luxe, get in touch with our events team through isabella@mackintoshatthewillow.com.