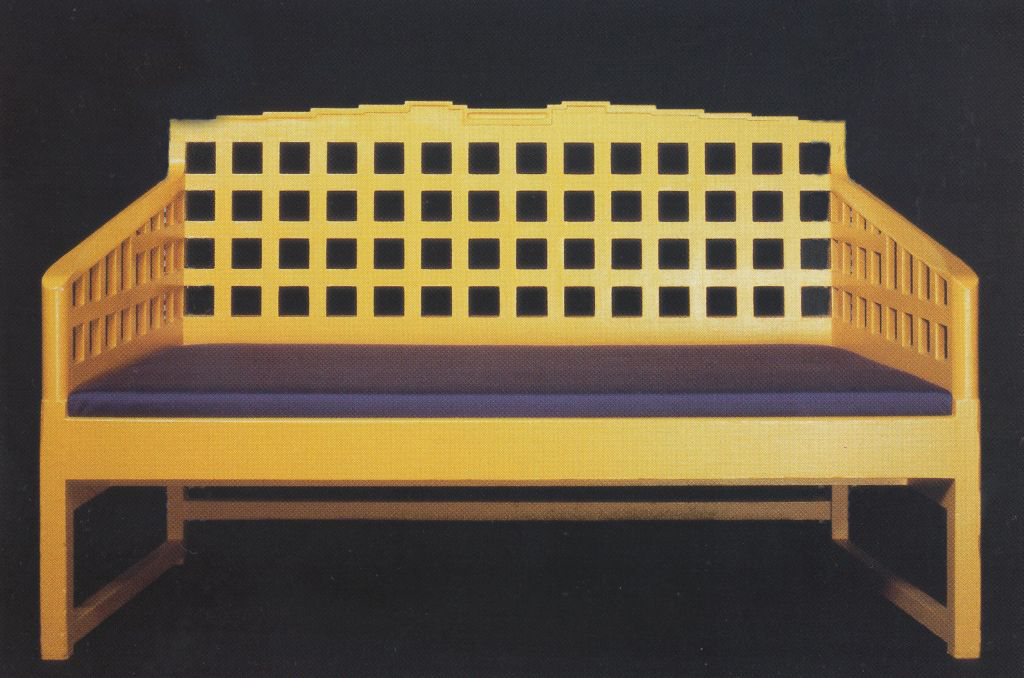 Mackintosh at the Willow, A Wee History – Part 17.

In 1916 Miss Cranston commissioned Mackintosh one last time to create a basement level tearoom in the adjoining building at 219 Sauchiehall Street. This tearoom could be entered through the Willow via a specifically inserted opening in the Front Saloon. From here, a staircase led down to the new tearoom which was known as The Dug Out – a reference to the trenches of WWI.

Like many other examples of his work, the Dug Out was tragically destroyed in the late 1920s. It was Mackintosh’s last commission in Glasgow and provides a tantalising glimpse of what might have been had Mackintosh found another patron in London as supportive as Miss Cranston.

There are no known photos of this space, and very limited drawings by which we can see how The Dug Out looked. What we do know is that it was completely different to anything Mackintosh had designed for Miss Cranston before. The ceilings were shiny and black with dark blue walls. Patterning of a geometric nature was a key decorative theme and flashes of bright yellow. This only adds to the rather mysterious nature of the Dug Out, as the whole space was eventually lost to time.

A replica of the yellow settle (bench like seat) from Mackintosh’s drawings can be seen today in interactive exhibition. The intensely bright pallet for this piece furniture demonstrates a new phase of Mackintosh’s artistic career and would serve to add light to the rather dark surroundings.

Two wall hangings, tragically lost in 2014 during the fire at the Glasgow School of Art, have been attributed to The Dug Out.  The figurative style is reminiscent of the works of collaboration between Mackintosh and Margaret Mcdonald Mackintosh, tying the Dug Out’s unique stylistic ideals to the rest of the tearoom. It has been speculated that the hangings might have been hung either side of the memorial fireplace, as though guardians of the lost souls of the war.

As mentioned, there is limited information regarding The Dug Out, luckily, however there is some key information from the GSA Archives which tells us:

“This item was lost in the fire in The Mackintosh Building at The Glasgow School of Art on 23rd May 2014. The canvas relates to smaller watercolours in the Hunterian collection, formerly thought to be textile designs, and to their painted canvas, ‘The Little Hills’ by Margaret Macdonald. It is likely that they were intended for ‘The Dug-Out’, though it is not known whether they were ever installed there. Jessie Newbery recalled in 1933, that ‘He (Mackintosh) and his wife spent the winter of 1914 painting two large decorations for Miss Cranston’. This would have been in Suffolk, after they had left Glasgow. Although The Dug-Out was not created till 1917-18 it is not unlikely that Miss Cranston was considering the project some years earlier. The canvas was found in the GSA in a single roll in 1981 and was cleaned and mounted on two stretchers.”

The Dug out, although not widely known, proves to be a point of interest with many of our staff and those affiliated with The Willow. When we asked the CRMS to tell us what their favourite parts of the buildings were and why, this is what Tommy Clarke told us about the Dug Out:

“One of the many things I love about the tearooms is the Dug Out, especially the fireplace. Not only is it (and the room as a whole) surrounded by mystery as no photographs survive of this section of the tearoom, it also stands out in design and colour to what had been used in the tea room before.

All that is left, are drawings showing a tantalising glimpse of what once was. I love how Toshie bravely embraces a new style of art from before it had even taken hold of the country.

Despite it being boldly different, I feel that it still links with the overall nature theme of the willow wood, hosting the root network of the trees with its strong lines and darker palate. The wall hangings said to have lived here also bring in similar shapes and the odd splash of colours seen in other rooms.

I feel that the Dug Out sometimes gets left out as some can’t create a picture in their mind from the drawings of what it looked like, but there is a nice feeling of knowing, that the fireplace in the front saloon, holds a secret doorway. “