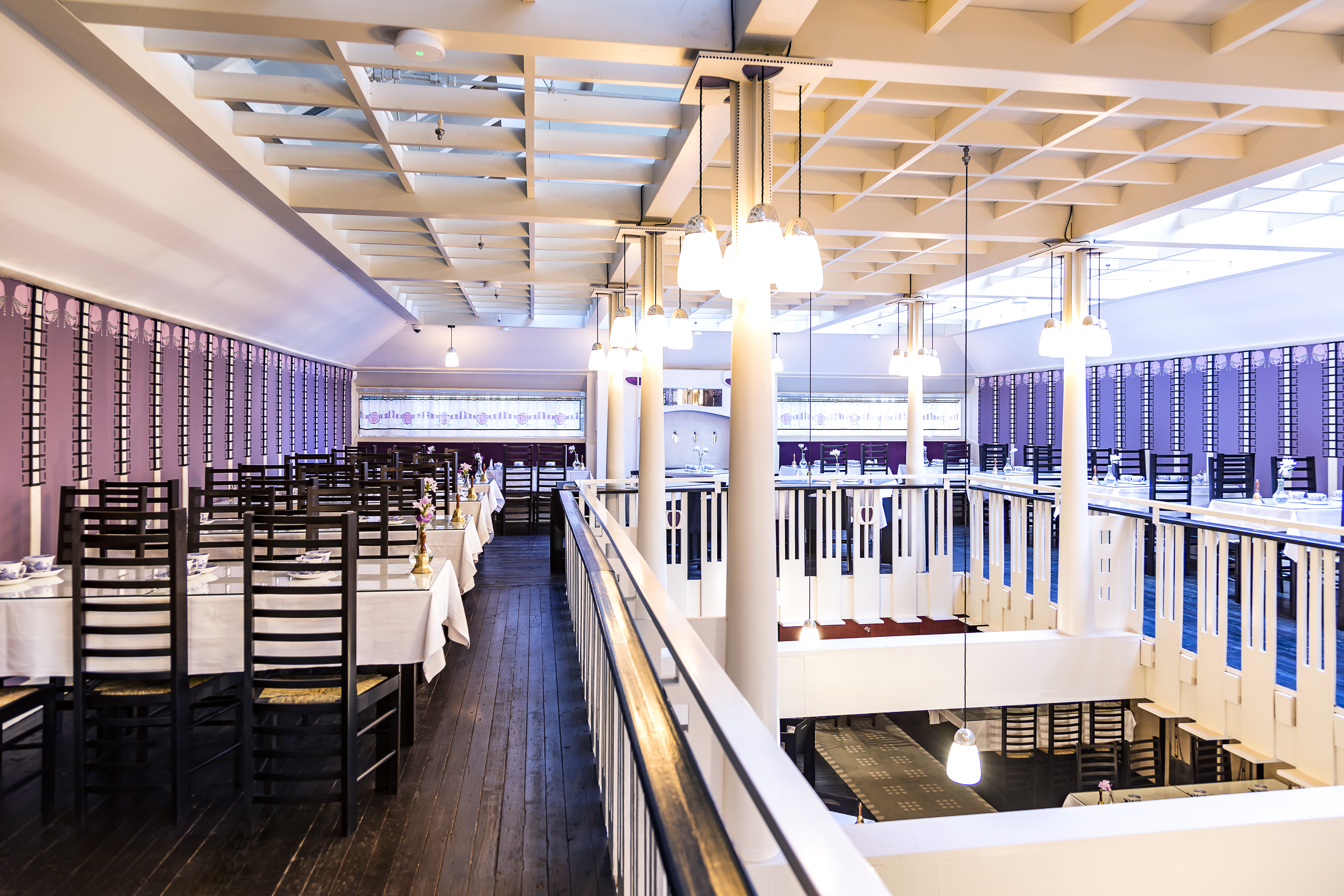 Mackintosh at the Willow A Wee History! Part 4.

This week we will be discussing the airy beauty of the Gallery at Mackintosh at the Willow.

As many of you will already know by now, despite the use of separate rooms within Mackintosh at the Willow, the building design was conceived as a single unit. This meant that Miss Cranston was able to offer a space that appealed to all customers, supplying an atmosphere that would apply to all differing tastes of her patrons, while maintaining a coherent theme throughout the building.

The main tearooms comprise of three of these spaces: the Front Saloon, the Back Saloon and the Gallery. The Front Saloon has high ceilings to accommodate the structure of the dominating Baldacchino, allowing for a light and airy ambience that was amplified by its pale cream walls and light pouring in through the main windows of the building’s frontage. From the Front Saloon, looking towards the rear if the building, one looks through to the Back Saloon which is crowned by the Gallery level. The Back Salon is moody and darker, grounding the space and creating a cosy nook amongst the lofty bright rooms that flank it. And finally, above it, we have this week’s subject! The Gallery.

The Gallery is a mezzanine level situated above the Back Saloon of the main tearooms. The area was created as an imaginative design feature, but also served as a savvy method of introducing more room for tables. This meant that Miss Cranston could be able to use the space more lucratively, bringing more customers in to the tea rooms and adding to the bustling atmosphere.

As with the rest of the building, the three areas combined were part of a single vision, the space represents a natural view of a field and a forest. The Front Saloon was an open meadow which pushes back on to a woodland area, embodied by the dusky and sheltered Back Saloon. The Back Saloon in turn represents the forest floor of a wooded grove whose trees stretch up to a canopy symbolised by the Gallery.

The Gallery is accessed by a flight of stairs leading from the main entrance of the tearooms. On your right-hand side as you ascend, you will notice that there is no solid wall, but rather carefully arranged glass and metal fittings spanning the vertical space between ceiling and stair. Green glass droplets hang delicately on wires between metal rods, allowing them to sway subtly with passing movement and recreating the feel of draping willow branches. At the top of this flight you pass through white doors inlaid with tiny squares of dark blue glass, reiterating the theme of repetitive squares that serve as a mechanism to unify the building. Upon passing through them, the visitor is standing in the entrance of the Gallery.

The walls of the Gallery are painted a shade of heather purple and separated into vertical panels by strips of black trellis patterns that are topped with iconic Mackintosh roses. The panels are divided by a white piece of wood that shoots upwards and allows for the pattern to have a three-dimensional aspect. The ladder-back chairs mimic these trellises in a mirroring effect that is consistent with Mackintosh’s design scheme.

The mezzanine opens to view the Back Saloon below, the shape is square with a regular almost serrated effect around its edges giving it the look of a large puzzle piece. At a certain point of the day, when the sun is shining, the shadow of this puzzle piece matches up perfectly with the patterning of the carpet in the Back salon. In the central open area of the mezzanine six pillars reach upwards, each adorned with four lights which hang from the top of them, again mimicking the willow tree. The ceiling is made up of skylights and in front of them is a ceiling-wide trellis that is heavily influenced by Japanese design. However, this trellis is not just another aesthetic element. It creates a familiar effect with the Scottish sunlight by simulating the effect of treetops dappling the light as it streams through their leaves.

So, in effect, the visitors to Mackintosh at the Willow continue to stand in the very alley of willows that Sauchiehall Street derides its name from, and the viewer has the sensation that the building is growing upwards.