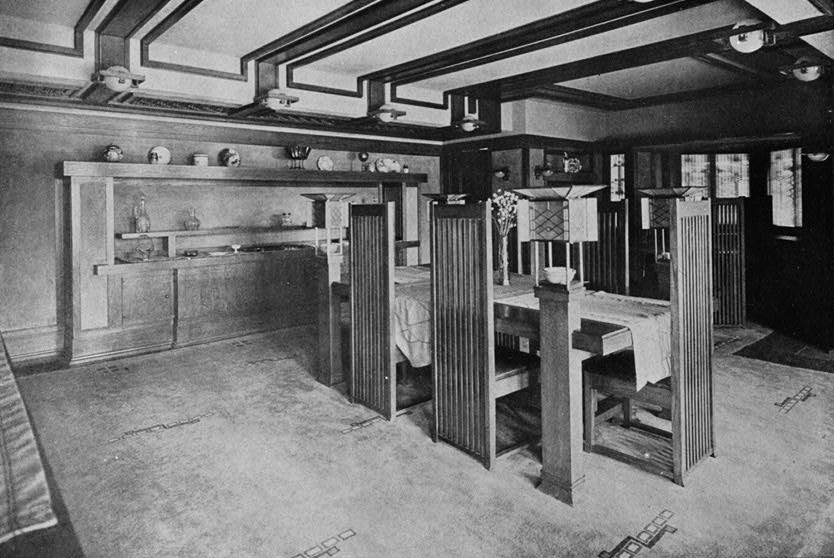 Mackintosh at the Willow, A Wee History – Part 11.

MACKINTOSH AT THE WILLOW SHOULDER TO SHOULDER WITH OTHER ARCHITECTURAL MASTERS

We’re delighted when international visitors and students come to Mackintosh At The Willow to marvel at the architecture and interior design. Very often American visitors will bring up the name of America’s most famous architect and contemporary of Mackintosh, Frank Lloyd Wright, and enquire as to whether the two men ever met, since their work seems reminiscent of each other. This week therefore we thought we’d take the time to share a little about FLW and how he compares (and contrasts) to CRM.

Sense of place and purpose

It’s hard for us in the 21st century to realise just how in thrall architecture was to very old traditions, although you can get a sense of it by looking around at buildings pretending to be Greek, Roman, Tudor or Italian etc even here in Glasgow. For both young architects there was something uneasy about this, especially when your own landscape and ‘native’ buildings provided such good examples of practical, harmonious work. Mackintosh took inspiration instead from Scottish Baronial castles, like Maybole, with their perfectly sized unornamented windows well suited to Scottish light, to inspire the Tea Room and Hill House. Traditional Scottish materials like harling provided the skin, rather than out-of-place red bricks. FLW looked to the prairies to find his ‘native’ elements. He compared indigenous dwellings to folksongs and folklore- part of the fabric of a culture, placed perfectly and emerging naturally from what the environment itself suggested. FLW would have none of the frivolous pretence that was designing a house that looked like an English chocolate box and plonking in down in the sweep of an American landscape- and CRM would surely agree- although both men embraced Japan as a source of inspiration.

This of course meant boldly striking out from what the accepted norm in architectural practice, so both men can rightly be praised for their bravery in trusting their own vision- in pushing forward even though they were in the minority and leaving behind unnecessary and inappropriate trinkets of a design out of time and context. “Shake off the props” as Mackintosh said. Find what FLW called “a quiet, simple dignity.”

Mackintosh designed the Willow as a space not for the elite but for the ordinary visitor, man or woman, to enjoy. To both architects the beauty and impact of a building should not be dictated by the wealth of the person using it. We often get asked if customers to the tearooms in 1903 were posh- absolutely not! Everything was reasonably priced, thanks to Miss Cranston’s firm belief in egalitarianism, and Mackintosh designed primarily to make you feel- not to make you spend (the cakes do that by themselves.) To enter the Salon de Luxe was to be transported, to have your imagination ignited- experiences not bound by how much money you had. For an American such as Frank Lloyd Wright this was the idea of freedom writ large: to quote Don Kalec: “in a democracy every person not only had a right to a home of his own but a right to a beautiful home…in Wright’s democratic architecture wealth only bought more square footage.”

And yet, the two architects had their differences, perhaps brought about by the context of their lives. Although CRM used new materials like concrete render (see MATW chimney) and electric light, FLW really threw himself into embracing the potential of ‘the machine’ as he called it. CRM still had a soft spot for the Arts and Crafts philosophy- beautiful handmade artistic objects- and he loved the work of the Vienna Workshop. Meanwhile FLW was fully enthused by the potential of steel and industrial glass etc.

One of the most significant differences is the way the exterior relates to the interior of the building. When you experience a FLW structure the interior flows naturally from the exterior, structural elements sometimes literally continuing inside. It’s practical, seamless and rigorous. For those of you who’ve visited the Willow you’ll agree our interiors are a complete surprise. Who could have expected all that purple, that incredible chandelier in the Salon, that astounding gesso panel of mythical faces and poetic forms just by looking at the unadorned white exterior? It’s fascinating to imagine what FLW’s designs would have been like had he collaborated (and loved) an artist as gifted as Margaret Macdonald. For CRM the practical exterior belongs to the outside environment, the decorative interior belongs to the imagination. It’s hard to imagine FLW deciding to place in a bedroom, a place of dreams, a tall black trellis-like chair in front of a stencil of climbing roses- but Hill House was built for Blackie, the publisher of Hans Christian Anderson’s fairy tales so really, why not?