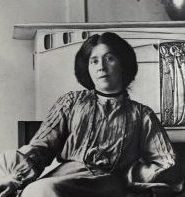 Mackintosh at the Willow, A Wee History – Part 16.

Margaret Macdonald Mackintosh was born in Tipton England on 5th November 1864, but her family had moved to Glasgow by 1890. Here, Margaret and her sister Frances attended the Glasgow School of Art, where she would study many skills such as textiles, embroidery, and metal work.

The sisters would eventually open the Macdonald Sisters Studio in the 1890’s at 128 Hope Street. Their work focused heavily on symbolism, imagery, folklore and literature. They would receive mixed reception for their work with many commenting that it was spooky and gaunt, a style clearly influenced by that of the much-admired Aubrey Beardsley.

Although we do not know exactly when Margret and Charles Rennie Mackintosh met, we can estimate that it was around 1892 when they were students at the Glasgow School of Art. They were introduced by the Headmaster, Francis Newbery, as he recognised their similarity of style. This led to the formation of the Glasgow Four, and Mackintosh’s friend and colleague Herbert MacNair and Frances Macdonald would also become a couple. The four would often be nicknamed “The Spook School”, with the influence from the Macdonald sister’s stylistic qualities.

Margaret and Mackintosh were married on 22nd of August 1900, just three years before their incredible collaboration at Mackintosh at the Willow.

Margaret’s work is now often marginalised by her husbands, which is common for women historically, yet she was widely admired and respected by her peers. Mackintosh wrote to her “Remember, you are half if not three-quarters in all my architectural work …”;[7] and reportedly, of her,  “Margaret has genius, I have only talent.”

This makes it tricky for us to identify and separate exactly what was specifically the design of Margret Macdonald and that of Mackintosh at Mackintosh at the Willow. Though we know Margret was the creator of the gesso panel of the Salon de Luxe, it has also been suggested and widely speculated that she was likely to have designed the whole room. It therefore stands to reason that she would have collaborated with her husband on the rest of the building work, with elements of her style showing throughout the tearooms.

Collaboration was a key aspect of Macdonald’s work, and she would go on to contribute interiors with other creatives to projects such as The Hill House,  House for an Art Lover portfolio, the Rose Boudoir, Turin and the Willow Tea Rooms.

Margaret’s artistic accolades are vast. She contributed towards over 40 American and European exhibitions between 1895 and 1924, though she appears to have stopped producing work after 1921.

Today the largest collection of her works can be found at the Hunterian Art Gallery at the University of Glasgow.

She died in 1933, five years after her husband.