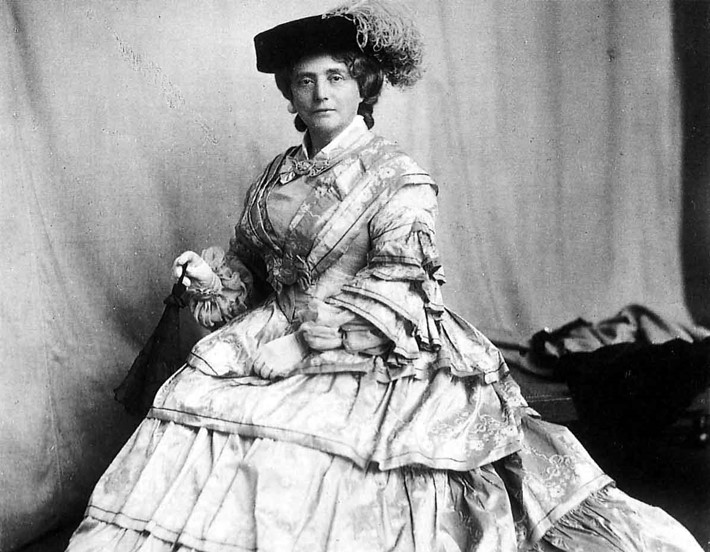 Catherine Cranston, also known as Miss Cranston or Kate Cranston, was a forward-thinking businesswoman, entrepreneur and advocate of new ideas.

Without her patronage and continued support of the young artists of Glasgow, its development and later renown in the artworld would not have been as successful as it was.

Catherine Cranston was born in her father’s hotel in Glasgow in George Square in 1849 to George and Grace Cranston. This was a new age of Victorian progress, with a flourishing industrial market. The family in general had ties to the hospitality and hotel industry but, most notably was George’s cousin, Robert Cranston, who opened the first temperance coffee house and lodgings in Edinburgh. Arguably there is a lot to credit Robert for in terms of manifesting the success of the women in his immediate and extended family. He had very progressive political views and was an early supporter of women’s suffrage. He invested money in his daughter’s education and encouraged her to not conform to middle class social conventions. Mary, Robert Cranston’s daughter, even received a hotel as a wedding gift. This would be the Washington Hotel on Sauchiehall Street, which would have had an impact on Catherine .

When Miss Cranston’s her mother died on October 22nd 1867, it is clear she took on further responsibility in the family home and business. This is where she would have started honing her hospitality and management skills that would eventually lead to her successful tearooms career.

Her brother Stuart began a move towards a love of tea before his sister, due to one of the regular guests at George Cranston’s hotels, a man by the name of Arthur Dakin. Dakin represented the tea firm “Twining’s” and eventually set up a young and eager Stuart Cranston with a position as invoice clerk at tea dealers “Wright, Napier & Co”. This began Stuart’s life-long relationship with the tea trade. Stuart eventually lists himself as a tea merchant in 1871, at the young age of 23.

Stuart would keep a kettle to hand so that he could offer his customers samples of the tea while they shopped. After moving to a larger premise in 1875, Stuart began charging for the samples which quickly developed to a cake and a cup of tea.

“What happened in Glasgow was rather tardily copied in London; other large cities following suit, and the movement spread over the length and the breath of land, was taken up on the continent, and spread to every civilised spot on earth”.

This is a clear It served as an extension for shopping for tea which felt safer for women, who would not have been accepted socially in pubs or taverns as they were male places.

By now, Miss Cranston was ready to embark on her on enterprises. She paid her friends a visit and paid her leave, clearly thinking they would wish to have nothing more to do with her when she opened her own business.

It is interesting to note here that she listed herself as C. Cranston. This removes the status of gender that would have men first, regardless of their surname, then married women and finally would list unmarried women. This incredibly savvy move meant she was even listed above her brother in the Glasgow Post Office Directory.

Cranston was also the first to refer to her business as a tearoom, even Stuart called his business a “sample room”.

As we have seen in Stuart Cranston’s premises, it was deemed socially acceptable for women to dine in these types of spaces in a way that it certainly was not in taverns and pubs. Miss Cranston’s premises catered to women and men, serving daily meals so there was no need to return home in the middle of the day – whether they were at work or taking a walk around Glasgow. The fact that Cranston’s business was also pro-temperance was also a draw. Temperance venues had an air of respectability that the customers would have wished to project on their own image.

In 1888, Glasgow held an international exhibition that would prove to be incredibly inspirational to the city’s architectural and artistic development. An enormous domed building was erected in Kelvingrove Park, surrounded by beautiful smaller structures of eastern design influence.

As the city began preparing itself for an influx of visitors by touching up its appearance and elevating its offerings, so too did Miss Cranston give her Tea Rooms at Ingram street a makeover.

She hired artist George Walton to repaint some of the spaces, which showed his influence from William Morris and demonstrated the same fresh ideas displayed by his brother, Edward. Edward Walton, one of the Glasgow Boys, who were experimenting with their work in a concentrated attempt to move away from the old academic style and rules that went with it.

This seems to be the beginning of Miss Cranston’s Career as a purveyor of “Art Tea Rooms”.

After she was married to John Cochrane in 1892 at the age of 43 she purchased the building at 91-93 Buchannan Street.

Marriage at this time could often remove a woman’s autonomy, making her remove focus from business ventures and concentrate all her energy on domestic tasks. However, Cranston’s marriage to Cochrane seems to have had the opposite effect. John Cochrane had the utmost respect for his wife’s business savvy and supported her growth throughout their relationship.

Cranston hired the young Charles Rennie Mackintosh for the first time in 1896. He was to aid in redesigning some of the spaces in the Buchanan Street tea room and produced murals for the ladies tea room, smoking gallery and luncheon room.

This marked the beginning of a long and successful business relationship with Miss Cranston and Mackintosh, who would go on to have a hand in design work in all four of her premises.

Cranston acquired the lease for 217 Sauchiehall Street and allowed Mackintosh full control of the design, both inside and out. The Willow Tea Rooms opened for the first time in October 1903.

Mackintosh completed an additional section to The Willow Tea Rooms called “The Dug Out” in 1917. John Cochrane sadly passed away on October 22nd 1917 and it was not long after this that Catherine Cranston withdrew from her businesses.

She died on April 8th 1934 and left two thirds of her fortune to the poor of Glasgow, leaving a lasting memory of a remarkable and passionate woman.