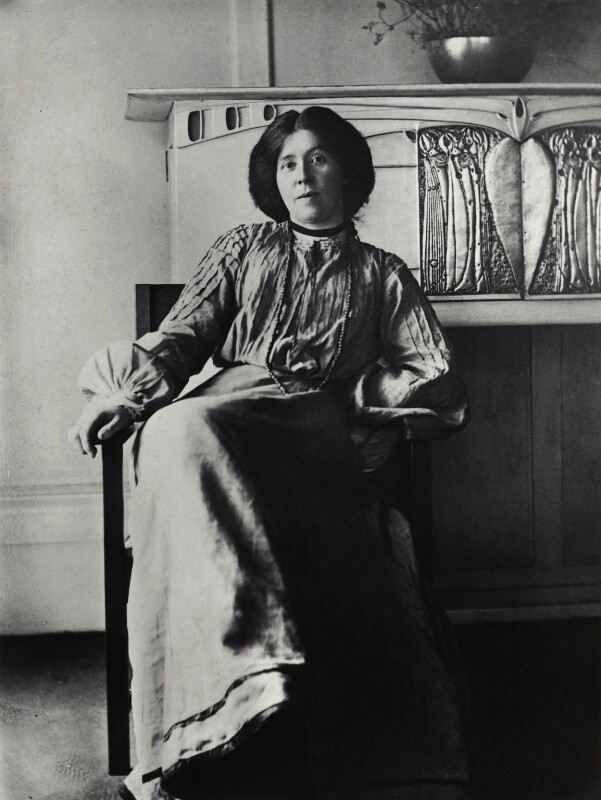 Margaret Macdonald was born November 5th 1864 at Tipton in Staffordshire. Margaret and her sister Frances enrolled as day students at the Glasgow School of Art in 1890 after their family settled in Glasgow. Their courses were in design and Margaret would go on to work with a variety of media, such as metalwork, embroidery, and textiles.
The sisters collaborated throughout their work and eventually opened their own studio, the Macdonald Sisters Studio at 128 Hope Street, Glasgow in the 1890’s. Some of their most spell binding work can be seen in their illustrations for Defense of Guinevere by William Morris which resides in the special collections at the University of Buffalo.
While studying at the GSA the sisters met Charles Rennie Mackintosh and his friend and colleague Herbert MacNair, probably around 1892. This meeting was likely arranged by their headmaster, Francis Newbery who had noticed the four students were working in very similar styles. In 1894 they were showing their works together at exhibitions and some of their works were collaborative.
Margaret was influenced by folklore, Celtic art, poetry, and symbolism. The sister’s art was often described as ghoulish because of the linear, lean forms portrayed in their works. There was a very clear influence of artist Aubrey Beardsley whose art was focused on erotic and grotesque themes saturated with spectral atmosphere. She was part of an artistic group called the Glasgow Girls which included figures such as Bessie MacNicol, Helen Paxton Brown, Annie French, Jessie Marion King and Margaret’s sister, Frances Macdonald. Women were able to flourish in Glasgow due to what is referred to as a ‘period of enlightenment’ at the turn of the century, between 1855 and 1920. Many have credited Francis Newbury as being a key figure for providing artistic opportunities for women during this period.

The Glasgow Girls were creating with many types of media and often designed and wore their own clothing, which resulted in a unique style of dress that was totally different from the common style of the time. We often see Macdonald wearing these designs in surviving images, showing her playful and imaginative nature.

Macdonald was highly imaginative, influenced by fairytale and poetry, which defined and distinguish her from her contemporaries.
We can see that Macdonald rarely uses sketch books, which suggests that much of her work was created from imagination rather than observation. She would often personify concepts such as seasons and time, embellishing them with stylized rather than naturalistic natural motifs.
Mackintosh and Macdonald married on August 22nd 1900 and they would continue to collaborate further. However, it is often difficult to distinguish just how much influence she would have had on his work and what work is hers and what is his.

“REMEMBER, YOU ARE HALF IF NOT THREE-QUARTERS IN ALL MY ARCHITECTURAL WORK …”
“MARGARET HAS GENIUS, I HAVE ONLY TALENT.”

Mackintosh’s work such as ‘Japanese Witch Hazel’ sometimes carries both his and his wife’s signature, which leads to questions of how much input she might have had on them. But historians such as Roger Billcliffe, ascertain that is because Margaret was present at the time that the work was created. Mackintosh was citing her as his muse.

Though Margaret can often be marginalized by the fame of Charles Rennie Mackintosh, she was very well recognized and respected as a great artist by her peers and historians. Macdonald contributed to more than 40 European and American exhibitions throughout her career.

In Vienna, Mackintosh and Macdonald exhibited at the 1900 Vienna Secession. It is clear that Macdonald heavily influenced the works of Gustav Klimt and Josef Hoffmann.

When the couples were granted free reign of their creations they seemed to flourish most. They created the music room for a villa in Vienna commissioned by Fritz Waerndorfer, who was the initial funder of the Wiener Werkstätte. The villa was designed to house and showcase the work of local architects and artists – Josef Hoffman and Koloman Moser were already working on some of the rooms.

The designs for House for an Art Lover were created by the couple in 1900, the Willow Tea Rooms designs began in 1902 and the Rose Boudoir at the International Exhibition at Turin in 1903.

Her final work was completed in 1921 and she died in 1933, five years after her husband.